The Daily Show’s Larry Wilmore Is Wrong, Bill O’Reilly Is Not ‘An Asshole’
video

The Daily Show’s Larry Wilmore Is Wrong, Bill O’Reilly Is Not ‘An Asshole’ 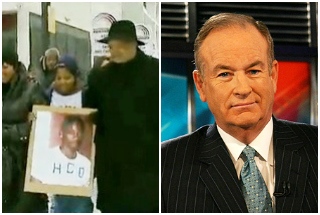 Fox News host Bill O’Reilly has been taking a lot of heat lately over his assessments of the black community in the wake of President Obama‘s Trayvon Martin speech. One standout among the anti-O’Reilly barrage was Daily Show Senior Black Correspondent Larry Wilmore‘s judgment of O’Reilly as “an asshole,” but despite my own criticisms of O’Reilly, I’ve come around to the notion that Larry was wrong, Bill O’Reilly is not an asshole.

It’s true that Bill O’Reilly has spent this week using the same statistical arguments to demonize black people that are used by more overtly racist people, and explicitly argued that people are right to suspect young black men like Trayvon Martin because they belong to such a violence-prone community. In O’Reilly’s defense, he is not alone in this trend toward normalizing racial profiling, which has made the species jump to mainstream American conversation.

It’s also true that, even within his blame-the blacks frame, O’Reilly has been all over the place. This week, it’s black girls who are to blame for black crime, a pivot from his weeks-ago position that it was young black men, but he has been consistent about blaming black leaders like Jesse Jackson for ignoring “black-on-black crime,” a common refrain from those seeking to ignore the racial issues embedded in the story of Trayvon Martin’s killing.

However, Bill O’Reilly is nothing if not a man. In February, Rev. Jesse Jackson led a march in Chicago to protest the death of 15 year-old Hadiya Pendleton, who was shot and killed the week after she performed at President Obama‘s inauguration. Despite 13-degree weather in Chicago that day, Rev. Jackson was joined by dozens of marchers, who went from the school that Hadiya attended, to the park in which she was shot and killed. Rev. Jackson demanded action from President Obama to stem the tide of violence in the city.

Bill O’Reilly could have simply ignored Rev. Jesse Jackson’s march because it didn’t fit his narrative. It’s not as if Hadiya Pendleton’s death was a frequent subject on The O’Reilly Factor, where Bill only mentioned her twice since her death. But Bill O’Reilly, man that he is, actually did cover that Rev. Jesse Jackson-led march on The O’Reilly Factor, and doubtless praised the civil rights leader for caring about the thing that O’Reilly accuses him of ignoring: