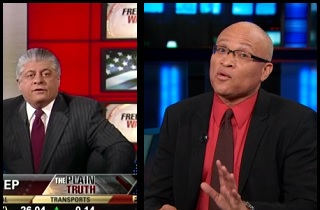 As Black History Month draws to a close, The Daily Show examined how one Fox Business Network program spent their time discussing the “mythologization” of President Abraham Lincoln, and some reasons why he might be overrated. Vampire hunting and being “kinda racist” were not among the reasons, but rather, Lincoln’s decision not to let slavery “die a natural death.” Daily Show Senior Black Correspondent Larry Wilmore was on hand to respond.

Host Jon Stewart played a few clips from the February 15 episode of Fox Business Network’s The Independents, in which Judge Andrew Napolitano and hosts Kennedy and Kmele Foster discuss Abraham Lincoln’s legacy, and all agree that Lincoln gets credit that he doesn’t deserve. First, Napolitano is shown explaining that in Lincoln’s day, “slavery was dying a natural death all over the western world,” but “instead of allowing it to die, or helping it to die by purchasing the slaves and then freeing them, which would’ve cost a lot less money, Lincoln set about on the most murderous war in American history.”

Stewart pointed out that Lincoln did propose compensated emancipation, and was rejected, but then played a clip of Napolitano claiming that “it’s not even clear that slavery was the reason for secession, but largely the impetus for secession was tariffs.”

Both ideas, Stewart pointed out, are popular in certain circles, but as Wilmore then pointed out, are unsupported by facts, logic, or moral decency. “These people think that Lincoln started the Civil War because the North was ready to kill to end slavery,” Wilmore said, “when the truth was the South was ready to die to keep slavery. You’re welcome, libertarians, I just unfucked your facts.”

He also pointed out that even the idea of “compensated emancipation” still validates the idea of people as property.

In fairness to The Independents, though, the full clip shows that the discussion also ranged to Lincoln’s civil liberties record, and atrocities committed by some in the Union army, which history ignores “because of the demonizing of the South, and it’s not even clear that slavery was the reason for secession, but largely the impetus for secession was tariffs that were being collected at Southern ports, and spent by Northern politicians.”

Kennedy then wound things up by observing that Lincoln has defenders “who say that if you are so opposed to Abraham Lincoln, that, in itself, racist.”

“Yes, people say that,” Napolitano replied, adding “I of course reject that. You have to be able to discuss every president with equanimity, without being tarred with a brush that won’t come off.”

Here’s the full Lincoln segment, from The Independents: