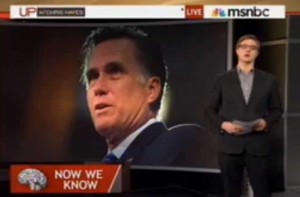 On Saturday morning’s Up with Chris Hayes, titular host Chris Hayes laudably focused on a story that’s been inexcusably buried by the political media this week: Republican candidate Mitt Romney‘s contention that no one dies from a lack of health insurance because there are Emergency Rooms. In his “Now We Know” segment, Hayes simultaneously called Romney out and gave him too much credit, saying “Mitt Romney doesn’t know what he’s talking about with respect to the deadly consequences of being uninsured.”

Mitt Romney knows, and I can prove it. Whether or not he cares is another matter.

While the media has spent most of the week focusing on the superficial mannerisms of the Obama/Biden ticket at debates (of the 18 stories we posted about the VP debate, fourteen of them were media complaints about Vice President Joe Biden‘s demeanor), rather than the substance, former Massachusetts Governor Mitt Romney was stepping in it like Mr. Magoo at a dog park, most noticeably by doing several Crazy Ivans on the issue of abortion.

Additionally, in an interview with the editorial board of the Columbus Dispatch, Gov. Romney also repeated a stunning claim that he made about uninsured people, a claim which gained in gravity following Romney’s debate performance. While his health care plan would gut patient protections and deny health insurance to millions, even as he baldly lies during debates and says it won’t, Mitt Romney is fighting this battle on two fronts by trying to convince his would-be supporters that it’s all okay, because not having health insurance never killed anybody: (emphasis mine)

“We don’t have a setting across this country where if you don’t have insurance, we just say to you, ‘Tough luck, you’re going to die when you have your heart attack,’??” he said as he offered more hints as to what he would put in place of “Obamacare,” which he has pledged to repeal.

“No, you go to the hospital, you get treated, you get care, and it’s paid for, either by charity, the government or by the hospital. We don’t have people that become ill, who die in their apartment because they don’t have insurance.”

Romney actually made a remarkably similar statement in a 60 Minutes interview last month, right down to the “apartment” that he imagines the uninsured must live in, but in that interview, he stopped short of explicitly saying that nobody dies from a lack of health insurance.

To paraphrase my friend Cenk Uygur, of coooourse people die from a lack of health insurance. Lawrence O’Donnell did an excellent segment last night on Romney’s most recent iteration of his ER health care plan, along with Sister Simone Campbell, giving examples of people who have done just that, and pointing out the many other things that are wrong with what Romney said (it’s not free, or even pad for by charity, etc: they will sue you into bankruptcy). O’Donnell also had some tape of Romney’s old nemesis, Mitt Romney From The Past, explaining the folly of such a system, but in economic terms.

Chris Hayes also pointed out how wrong Romney is, citing a study that puts annual deaths due to a lack of health insurance at 45,000, but really, in a moral society, that number ought to be zero. However, he also made the mistake of crediting Mitt Romney with being merely ignorant (if willfully so), and not a soulless monster:

In fairness to Hayes, I made the same mistake when writing about this a few months ago, based on a conversation I’d had with Sen. John McCain:

To be completely honest, I don’t think Republicans want you to die, or just don’t care if you die, or just don’t notice, I think they just don’t understand that people can actually die because of this issue, it just doesn’t register within their bubble of experience. If it did, their policies would be inhuman, and I refuse to believe that about so many of my fellow men and women.

I still believe that of Sen. McCain, and probably a lot of good people I know who are Republicans, but I was wrong to think that of Mitt Romney. He knows that people die from a lack of health insurance, because his own campaign said so:

Joe Soptic’s wife died because she ignored her illness until it was too late, because she couldn’t afford to see a doctor without health insurance, and she died. Mitt Romney might not know about the studies and the goings-on in apartments, but he damn sure knows about this, and it was his own campaign that drew a straight line from Mrs. Soptic’s death to the geographic happenstance that left her without insurance. Mitt Romney and Paul Ryan are a two-man Death Panel, and as his own campaign demonstrates, he knows it.