The Deficit Debate: Joe Scarborough And Paul Krugman Face Off, Get Heated On Charlie Rose 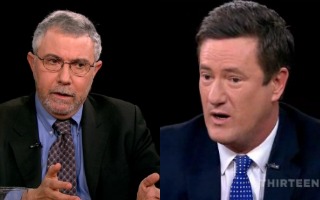 MSNBC host Joe Scarborough and New York Times economist Paul Krugman faced off on Charlie Rose on Monday night, sparring over America’s economic situation. In the taped debate, the pair sparred over their opposing views on the deficit and spending, with Krugman later feeling as though he’d had his “Denver debate moment.”

As predicted, Krugman and Scarborough continued to not see eye-to-eye on the issue — with the former insisting the deficit is not an immediate problem, and the government should instead be spending more to aid a recovering economy. Scarborough, meanwhile, argued that Washington can do two things at once (though they haven’t been doing much of anything as of late).

The debate grew testy at times, with Scarborough repeatedly pressing Krugman on his past statements and warnings about the deficit issue. “You’ve been predicting this for 20 years,” he reminded him.

A tense exchange followed as Krugman replied, “That’s such a tired argument, to go and search for quotes in stuff I said once upon time instead of dealing with the issue.” He later added, “It’s so disappointing if all you can do is ad hominem and say, oh, you said this, and you were — you know, pull out the ad hominem.”

“Anybody that knows me knows I don’t engage in ad hominem attack,” Scarborough replied, to which Krugman insisted, “That’s what you’re doing right now.” The MSNBC host begged to differ, arguing he was “quoting back what you said.”

The debate also grew heated at other points, including toward the end, when Scarborough took issue with Krugman’s muttered “wow” at one of his arguments — and compared him to Al Gore’s sighing during a 2000 presidential debate.

“You know what? If you could just stop from saying, ‘Wow,’ and let me just finish a point, Paul,” Scarborough said. “You and Al Gore really need to talk about it. This is a real problem. If people don’t agree with you all the time … you just feel like you have to take the cheap shots.”

Ahead of the interview’s airing, Krugman took to his blog feeling he’d had his “Denver debate” moment: “I was tired, cranky, and unready for the blizzard of misleading factoids and diversionary stuff.” But, he later added, “having a Denver moment isn’t the worst thing that can happen. Ask Mitt Romney.”

Check out a couple highlights below,