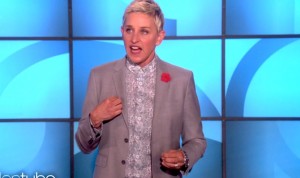 As she opened up her show yesterday, Ellen DeGeneres added a great deal of seriousness to her usual verve as she addressed the controversial new bill signed into law this week in Mississippi.

While its proponents have called it a bill to protect religious freedom, Gov. Phil Bryant has been under fire since Tuesday over a law that protects people from legal punishment if they deny services, nullify privileges, or fire LGBT people from jobs over religious grounds. DeGeneres, who has been openly gay since 1997, said that even though she’s not a “political person,” the new law flies in the face of human rights and the Obergefell V. Hodges decision.

“I’m disappointed for several reasons. First of all, Mississippi is the only state I know how to spell. Second of all, that is the definition of discrimination. It is also something that the Supreme Court already ruled on when they made marriage a right for everyone. Everyone. And they’re Supreme. I mean, that’s the best you can get. It’s like the Nacho Supreme from Taco Bell.”

While DeGeneres continued to humorously make a few jokes, her intention was clear that her viewers look at her personal experiences as reason not lose hope.

“I was fired for being gay, and I know what it feels like. I lost everything. But look at me now,” DeGeneres said. “I think we need to remember that we are more similar than we are different… So I advocate for less hate and more love.”

Watch above, via NBC