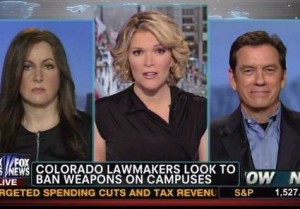 Fox News’s Megyn Kelly took on Colorado State Rep. Joe Salazar (D-Thornton) and his arguments against women carrying concealed weapons Tuesday afternoon. As Kelly sums up the story, “One State Democratic lawmaker argues that women who fear they are about to be raped shouldn’t have access to guns because they’re apparently too unreliable to know what’s actually happening to them.”

After playing a clip of Salazar’s controversial remarks and quoting from his subsequent apology, Kelly read from a University of Colorado memo that suggests alternative strategies besides guns for women to use if they are in danger of being raped. These include telling your attacker that you “have a disease or are menstruating” as well as “vomiting or urinating.”

Fox News contributor Leslie Marshall reacted to the story by saying “this is why I always say I’m a woman before I’m a Democrat because I have heard men on the left and the right make disgusting and offensive remarks when it comes to women, when it comes to our emotions, and when it comes to our ability.” She added that this is “not a political issue, it is a gender issue” calling Salazar’s words “disgusting” and “shameful.”

Meanwhile, radio host Chris Plante agreed with Marshall that Salazar’s comments were outrageous, but he did think that it “would be a political issue rather than a gender issue if the gentleman involved were a Republican and he was talking about legitimate fear of rape,” tying him to Todd Akin, Richard Mourdock and other Republicans who have “misspoke” about the issue.

Plante said he thought Salazar’s ideas sounded like something “coming from the University of Riyadh in Saudi Arabia, like they’re coming from the 1920’s in the United States of America and the idea that the best way to keep women safe is to disarm them, announce that they will be disarmed, so there’s no deterrents whatsoever” is not realistic.

Things turned a bit more personal when Marshall described her own experience of being raped at the age of 19, when she says a gun “would not have helped” her. She shared some of her alternative self-defense measures with the viewers. “I believe everybody has a right to their Second Amendment, but there are ways to protect yourself. Years ago they would say lay down and let him do it so you’ll live. No, that’s not what you do.”

Plante then picked up the NRA stance of “the only way to stop a bad guy with a gun is a good guy with a gun” by arguing that the University of Colorado is “inviting psychotics” onto campus by announcing that they are effectively disarming their student population.

Kelly ended the panel with one more piece of advice for potential victims of violent attacks that has nothing to do with guns: “Don’t go to the second location.”