The Dooce Is Loose With The Truth: Steve Doocy Adds ‘Unlike Some People’ To Obama ‘Silver Spoon’ Quote
video

The Dooce Is Loose With The Truth: Steve Doocy Adds ‘Unlike Some People’ To Obama ‘Silver Spoon’ Quote 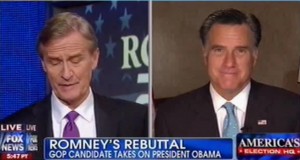 They say a lie can get halfway around the world before the truth gets its boots on, but having a top-rated cable news network on its side helps the lie out even more. TPM points out that Fox and Friends host Steve Doocy got creative with a President Obama quote, adding the words “unlike some people” to the President’s “I wasn’t born with a silver spoon in my mouth.”

The President’s actual quote drew a tellingly defensive response from Mitt Romney, and while Doocy should have quoted the President accurately, the ensuing outrage isn’t completely out of left field.

Here’s Steve Doocy’s POTUS remix, from Fox and Friends, followed by what the President really said:

TPM also noted that Fox News’ propulsion of the Fauxte extended beyond their own viewership:

Regardless, the unspoken words were imputed to Obama in a Washington Post article, a New York Post editorial and conservative blogs after Doocy’s segment.

White House spokesman Jay Carney said the remark had nothing to do with Romney. Nor is the phrase new: Obama used the words “silver spoon” in a similar context during a March 2009 speech about the importance of education and opportunity.

Now, as far as the White House denial goes, it had to have at least occurred to someone that the remark might be seen as a shot at Romney, and decided to leave it in. Politically, this is a feature, not a bug, as it puts Romney on the defensive about the low-tax, high-income policies he promotes, which just so happen to benefit him personally. While the President, and the context he surrounded the remark with, may say otherwise, we all know that a Romney-centric interpretation of that remark was not unwelcome.

That’s just how it is, though. Sometimes, these things are hard to pin down, even when they’re obvious. The beauty (or the frustration, depending on your point of view) of the fig leaf , strategically, is that it serves to amplify the attack, even as it obscures it.

Speaking of fig leaves, though, TPM’s headline leaves Doocy some undeserved wiggle room, posing its premise in the form of a question: “Did Fox News Fabricate An Obama Quote?”

There’s no question about it, Doocy tells Romney “Here’s what (the President) said,” and looks down to read the “quote.” It’s quite possible he was foiled by some bad copywriter, but we’ll have to wait and see. Fox didn’t respond to TPM’s request for comment. I expect Doocy will make a quiet correction tomorrow morning, as he has done in the past.