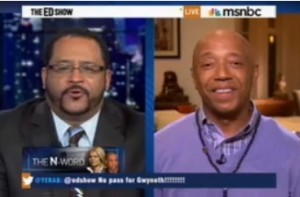 Prof. Michael Eric Dyson, filling in for The Ed Show host Ed Schultz Tuesday night, debated Gwyneth Paltrow‘s recent n-word tweet with entertainment mogul Russell Simmons, and wondered if rappers like Nas, who called Paltrow a “real n*gga,” had the authority to give the actress a pass. After a discussion of black cultural attempts to reclaim the word, Prof. Dyson delivered an “ironclad” ruling as to when white people can say the n-word: “Never!”

To be clear, this is America, anyone can say the n-word, or anything else they want. Dyson and Simmons were discussing what circumstances, if any, they (and other black people) would find such use acceptable. They both seemed to agree that the use of the word among black people, as a way to “take the venom out of the viper of the n-word and drain it once and for all,” while still a matter of debate in the black community, is acceptable, insofar as it is a done deal.

But Prof. Dyson, who played a clip of rapper Nas saying “Gwyneth gets a pass. Real people get a pass, man. W know what this sh*t is. Gwyneth Paltrow’s a real n*gga,” challenged the idea that rappers, many of whom he felt “have no sense of the historical complexity of how this word has evolved,” have the right to give white people a pass.

Simmons seemed inclined to grant forgiveness to those white folks who remain teachable. “That reality seeps out into the communities, outside of the black community, and some people mistakenly use the word,” he said. “I managed The Beastie Boys, 3rd Bass, all the first white rappers. Eminem has elected not to use it. I recommend anyone who doesn’t have a direct blood line to a slave not use it.”

Prof. Dyson concluded with a simple ruling, saying “Here’s an ironclad law that will help, here’s when you can say the n-word: never.”

Because of the word’s unique history (it’s not just a nasty word for a race of people; it was used as a conditioning tool under torture. Unlike epithets like “cracker” or “mick,” the n-word was literally used as a weapon), white people don’t have standing to do much beyond ask questions about it. A common one is “Well, if they can say it, why can’t we?”

A friend of mine told me he explained it to someone this way: “You get white privilege, you don’t have to worry about being discriminated against for jobs, or being followed around in a store, or getting shot when you get pulled over,” he explained. “This one thing is ‘black privilege.’ That’s not a bad trade.”

I use the example of other “insider” terms like “sweetie” or “f*ckface,” which you might call your girlfriend or your buddy, respectively, but which would garner a different reaction if used by an outsider.

But that brings up the central question in Paltrow’s case, and other ‘Hood Pass controversies like John Mayer‘s ill-advised remarks awhile back. What about white people who feel like part of the “family?”

It’s been my experience that “down” white people often misjudge the scope of the ‘Hood Pass. At most, it grants you a mulligan, or a series of mulligans, until you’ve been corrected. Then, it expires, and the familiarity is tolerated, at best, and not tolerated, at worst. A ‘Hood Pass gone wrong is a uniquely uncomfortable scene.

I don’t know if rappers have the authority to grant passes, and while Professor Dyson’s declaration is a good general rule of thumb, there ought to be some sort of high court to rule on possible exceptions. There are obvious ones, like whether a reporter should use the word when directly quoting someone in a news story. But what if a white person has to use the n-word in order to avert a terrorist attack? Sounds far-fetched, but it happened to John McClane in Die Hard 3.

The truth is, no matter what the circumstance, even a justifiable one like the news reporter example, the word will always sting when coming from a white person’s mouth. The calculation, then, is whether the point you’re trying to make is worth that sting. Proving you’re “down” doesn’t qualify.