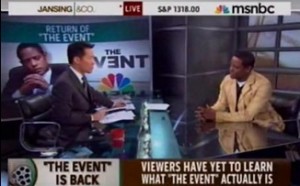 Yes, twenty-four hours is a lot of time to fill, and examples of infotainment “synergy,” both egregious and less so, are commonplace these days, but that doesn’t mean we have to like it. On MSNBC this morning, the news broke that NBC’s The Event is returning Monday night, with a two hour episode! Star Blair Underwood was on hand to give MSNBC viewers the scoop on how he modeled his President Martinez after Barack Obama, Ronald Reagan, and others, and claimed that his character doesn’t have any “birther issues.”

Watching this segment made me feel like a cranky old man, rolling my eyes and muttering to myself, “That’s not news!”

Still, Underwood’s “Birther” observation is a telling sign that the Republicans’ favorite conspiracy theorists are burrowed into our pop culture to stay: (from MSNBC)

The Event is a show about some “non-terrestrials” who crash-landed in the 1940s, half of whom were scooped up and locked away in an Alaskan Gitmo, while the other half infiltrated human (or should I say terrestrial?) society in search of a way home. The show began promisingly, with some intriguing plot twists and dramatic grace notes, but quickly succumbed to its fatal flaw. Although lots of big things happen on The Event, none of those things ever turns out to be The actual Event. In order to keep people interested in the show, they’ve had to jump more sharks than The Fonz in a pole-vaulting remake of West Side Story.

So, when Blair Underwood explains that his character “doesn’t have any ‘Birther’ issues,” I think he’s greatly underestimating the eventual desperation of the show’s writers. President Martinez (D-NBC) hasn’t been DNA tested yet, or been made to show his birth certificate, although he does have a Republican veep. I guarantee the show will, at some point, question the humanity of Underwood’s POTUS, right before he has to run for re-election against a former Alaska governor who thinks the non-terrestrials should not retreat, but reload.

It’s a shame that TV networks decide to bet all of their sci-fi chips on poorly-plotted junk like The Event and V, and criminally cancel awesomeness like Firefly. Oh, and if you’re still watching The Event, here’s a spoiler alert for you: They’re not from space, they’re time travelers from Earth. You heard it here first.