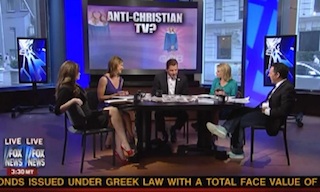 A favorite topic on The Five has always been how seemingly unfair it is that Hollywood feels ok with making fun of Christianity but not Islam. Personally, I’ve always assumed that this is because the hosts all have spec scripts for wacky Muslim sitcoms that they’re all desperately shopping around. Whatever the case, the issue has been debated a number of times on the show. However, no one on The Five is running for president (yet), so they have time to discuss such matters. That’s not the case for Newt Gingrich who got some grief today for throwing his two cents in about the show’s pet topic.

Gingrich’s comments came in reference to ABC’s new series GCB. You know GCB. It’s the new prime time soap whose vague titular acronym caused us all to look at the subway ads and wonder “What the heck is that?” until it finally premiered and we all went “Oh…I see.” Well, that acronym apparently stands for either “Good Christian Belles” or “Good Christian Bitches” (depending on how incredibly edgy you like your network television comedies) and that is something that infuriated Gingrich! Or, more likely, looked to one of his advisers like an easy thing to pretend to be infuriated about. Either way, he took the time out of his whole presidential campaign thing to complain about it.

And they weren’t even normal complaints like “Leslie Bibb is a funny actress and deserves better.” They were all about how American television is too scared to make fun of those darn Arabs. Boring. Hell, even on a news day as slow as this one, the hosts of The Five couldn’t muster up the energy to join Newt in protecting Our Lord and Savior Jesus Christ from the mean TV people.

“Stay on the economy! Stay on $2.50 gas! Stay on things that you can actually win on!” exclaimed Eric Bolling.

Kimberly Guilfoyle attempted to defend Gingrich by arguing that he does have a point that networks wouldn’t make a show like this about Muslims.

“How does that make it any more presidential?” retorted Bolling.

Obviously, if Gingrich isn’t even winning over this crowd, it’s time to find a new fight.

Oh, and one more thing: I’m not Muslim, but I’m going to take a wild guess that most Islam practitioners are just as bummed as everyone else that no one wants to make any TV shows about them. It’s got to get tiresome staring at our pasty white faces every day.