The Five Agrees That Syrian Rebels Are Moderate: ‘Moderately Psycho’ 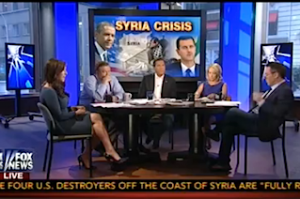 The Five opened its Thursday afternoon show by looking at recent comments from Obama Administration officials assuring Congress and the American people that the rebel forces in Syria are more “moderate” than they are being portrayed in the media. Greg Gutfeld said Secretary of State John Kerry is “right” that the rebels are moderate. “They’re moderately psycho.”

Gutfeld employed an elaborate reality TV-themed metaphor to get his point across. “We can’t confirm anything about this conflict except that it’s a conflict,” he said. “Essentially it’s like the TV show Storage Wars where you show up and you’re going to buy that locker and you have no idea what’s inside of it.”

Dana Perino, who had her own experience as President George W. Bush’s press secretary trying to sell the idea of war in the Middle East, said she’s “trying to be supportive” of the administration, but is finding that “everything that you read their case seems to unravel a little bit more.”

Next up, Eric Bolling, who said he was told to keep his props at home today, focused in on a “disturbing” video of rebels executing Syrian soldiers, posted by The New York Times, that he says “underscores” that “we don’t know who the rebels are.” He asked, “Are you sure you want to help those people out?”

Bob Beckel was the only member of the panel who was willing to defend the “Free Syrian Army,” which he said condemned the executions by the rebels. He also fought back against Bolling’s characterization of the proposed action in Syria as a war, saying “this is an exercise in humanitarian relief.”