The Five Panel Agrees: We Should Stop Wasting Our Time In ‘Ungovernable’ Afghanistan
video

The Five Panel Agrees: We Should Stop Wasting Our Time In ‘Ungovernable’ Afghanistan 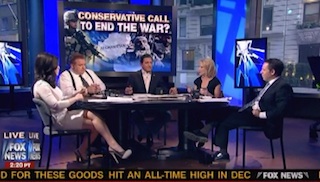 Just a few short months ago, President Obama was getting hammered for his plan to “cut and run” from Afghanistan. Nowadays though, some burned Korans and an escalating number horrible deaths have sent us right through the looking glass. “Why are you so weak, Obama?” has apparently turned into “What the hell are you waiting for?!” Today on The Five, all of the hosts agreed that it was time to leave the nation far behind.

Not only did they agree, they all had some extremely colorful ways of explaining why we needed to get out. Here’s a taste:

The only one who had any hesitation was Dana Perino who still thought there might be a chance to bring freedom to those that don’t have it, namely the Afghan women. However, she didn’t seem interested in arguing the point too heavily. In fact, the only real disagreement in the segment was over the claim that liberals have always thought Afghanistan was a “good war” and conservatives were actually trying to get out for years.