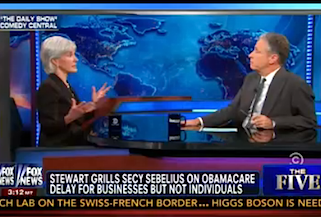 “Kathleen Sebelius did something brave last night, she went on the Jon Stewart show,” Dana Perino said, introducing the clip. “And she got quite a grilling.” If it was incongruous to hear a conservative describe an Obama Administration official’s appearance on The Daily Show as “brave,” it demonstrates just how tough Stewart was on Sebelius.

On the question of how many Americans have signed up for the Affordable Care Act exchanges, of which Sebelius would not give a concrete answer, Eric Bolling said there are two options. Either “the number is so low it’s embarrassing for them” or ” the system is so incompetent” that “they’re worried the whole thing could collapse on itself.”

Describing the “fiasco” that has been the Obamacare rollout, Tantaros made her John Boehner analogy, saying Stewart was effectively making the House Speaker’s point that the individual mandate should be delayed “because it’s not fair that an exemption was given to businesses.”

“Let’s assume you’re all right,” Bob Beckel said, that Obamacare is going to “fall apart.” If that’s true, he said, “then let it fall apart. It gives you a campaign issue, it gives you everything you want. You don’t have to sit there and try to mess with the full faith and credit of the United States government when it’s something you think you will win anyway.”

Like Stewart, Beckel argued that the real solution here is a single payer system that that would simplify everything and eliminate many of the problems the current law is facing. When Tantaros brought up the “scary” idea of a government-backed health insurance exchange coming in and competing with the existing insurance comparies, Beckel said, “Good. Run them out of business. It would be fine with me.”

And you can watch Stewart’s full interview with Sebelius below, via Comedy Central: