The Five Asks: How Can We Believe That NSA Has Stopped Terror Attacks, Won’t Abuse Power?
VIDEO

The Five Asks: How Can We Believe That NSA Has Stopped Terror Attacks, Won’t Abuse Power? 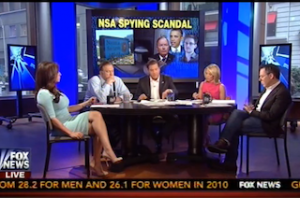 After a week of heated debate over the NSA surveillance programs, the hosts of The Five finally got to hear from President Obama and NSA Director Gen. Keith Alexander today. But that doesn’t mean they are accepting the defense and justification from the government at face value. On Tuesday’s show they asked if Americans can really believe what they’re being told.

Next, Eric Bolling went even further, rejecting assertions from Obama and Alexander that the NSA is not looking at content of phone calls and emails. “I am reasonably certain there’s an ability to get more information than… just basic details about a phone call,” he said. “I am reasonably certain there’s a way, and they may have already done this, to have access to the phone calls and the e-mails.” He added, “they say they’re only going after foreign intelligence and terrorists and treason-like issues. But how do we know that? I mean, the IRS wasn’t going to do what they did either.”

Greg Gutfeld pushed back on Andrea Tantaros‘ assertion that the program is “ripe for abuse” and should therefore be altered. “If something is ripe for abuse,” he said, “you try to create a way to prevent the abuse from happening, but you don’t dismantle something that could possibly save lives.” Gutfeld said the political “disarray” from both the right and left on this issue is only benefiting “radical Islam.” And, he said, if we remove the NSA programs, “it gives them a first class ticket to the apocalypse.”

And Dana Perino tended to hew closer to Gutfeld than she did to Beckel and Bolling. She said she had “no reason to believe [Alexander] would lie that there were 50 plots” plots stopped by the NSA. Further more, she said that of the members of Congress who have been briefed on the details of the programs, “not one that went into that briefing has come out and said ‘Holy cow, your Fourth Amendment rights have been totally–‘ That’s not happened by the people that have been informed about it.”

In reference to the “advisory board” that President Obama has vowed to set up for the NSA, Bolling said, “There’s another advisory board, it’s the media.” But, as Tantatos pointed out, “the media isn’t the one breaking the scandals.”