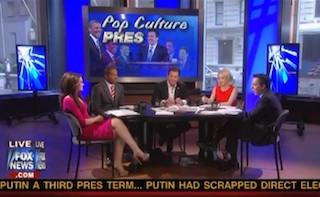 “Welcome back to high school where the cool kids rule!” exclaimed Greg Gutfeld on today’s The Five. It was his way of introducing the segment on President Obama’s appearance with Jimmy Fallon late night. Following in the outraged footsteps of Fox & Friends and the RNC, Gutfeld and his co-hosts railed against Obama for appearing on the show and for trying to be cool, which Gutfeld pointed out was just an “evolutionary trick to hide incompetence.” This led into a lengthy discussion about why being cool isn’t cool.

In other news, The Five totally didn’t want to go to President Obama’s post-prom party anyway. Everyone there is a jerk!

Under a large graphic labeling Obama the “Pop Culture Pres,” the hosts (minus Juan Williams, borrowing the “liberal seat” from Bob Beckel) agreed with Gutfeld’s monologue decrying the Fallon appearance, Obama’s coolness, and the media’s attempt to make anything conservative, rich, or Middle America synonymous with “uncool.” The only part that they didn’t all agree on was his assertion that Ronald Reagan wasn’t cool (a controversial remark that threatened to derail the conversation).

Eric Bolling and Kimberly Guilfoyle pointed out that the high school generation are supposed to define what’s cool so really Obama should be the opposite of cool since he’s making it harder for them to find jobs.

However, the host who seemed most passionate about attacking the Tyranny of the Cool was Dana Perino. After she shored up her uncool credentials by reminding people she was on the debate team and getting labeled by Gutfeld as “America’s Lisa Simpson,”* Perino let loose on the whole affair.

“I get it. People say, ‘You’re a prude. You don’t have any fun.’ I don’t care what they think. I thought last night was awful. I thought that was really bad. We have so many issues and problems going on in this country around the world. You can’t swing a cat without finding President Obama on a comedy show. When was the last time he had a national security meeting?”

Williams tried to point out that Perino’s old boss has made many appearances on The Tonight Show but she shut him down by arguing that Former President Bush waited till after he was in office.

Do you hear that, Mitt Romney? You better get your SNL appearance out of the way now. If you wait till after you’re elected, The Five will totally rip you to shreds! You know, probably.

Really though, isn’t The Five just engaging in class warfare? I mean, what happened to the time in America where being cool was a good thing? We as a nation used to look up to the socially successful, but now conservatives think its something that should be apologized for? That definitely sounds like class warfare to me…with the class in question being AP Chem. Or the A.V. Club or something.