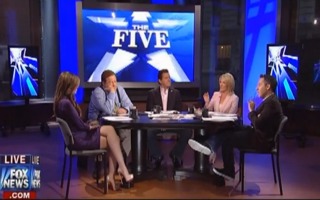 On Wednesday, Fox News Channel’s The Five broadcast their own edit of a highly publicized speech that President Barack Obama delivered to supporters over the weekend in which he said that private sector success is partially due to the social contract which makes it possible to succeed. Their edit boiled the speech down to its most unflattering portions and effectively misrepresented the context of Obama’s remarks. The full context of Obama’s speech is not particularly exonerating but, in broadcasting this edited snippet, The Five played into the hands of Mitt Romney’s critics who charge that Obama’s speech is not nearly as politically toxic in its full context.

“If you’ve been successful, you didn’t get there on your own,” said Obama in the edited clip that aired on The Five. “If you were successful, somebody along the line gave you some help.”

It was there that a conspicuous edit cut out the rest of the President’s speech and started again with Obama saying, “if you’ve got a business, you didn’t build that.”

That’s it? A nearly two and a half minute campaign clip reduced to its most politically damaging constituent sound bites? That’s something a campaign committee can get away with putting together, but it should not be acceptable even for an opinion show like The Five to broadcast that without noting the editing.

Here is the transcript of the speech in its full context:

(Bold text is from The Five’s edit)

We’ve already made a trillion dollars’ worth of cuts. We can make some more cuts in programs that don’t work, and make government work more efficiently…We can make another trillion or trillion-two, and what we then do is ask for the wealthy to pay a little bit more.

If you were successful, somebody along the line gave you some help. There was a great teacher somewhere in your life. Somebody helped to create this unbelievable American system that we have that allowed you to thrive. Somebody invested in roads and bridges. If you’ve got a business, you didn’t build that. Somebody else made that happen. The Internet didn’t get invented on its own. Government research created the Internet so that all the companies could make money off the Internet.

The point is, is that when we succeed, we succeed because of our individual initiative, but also because we do things together. There are some things, just like fighting fires, we don’t do on our own. I mean, imagine if everybody had their own fire service. That would be a hard way to organize fighting fires.

So we say to ourselves, ever since the founding of this country, you know what, there are some things we do better together. That’s how we funded the GI Bill. That’s how we created the middle class. That’s how we built the Golden Gate Bridge or the Hoover Dam. That’s how we invented the Internet. That’s how we sent a man to the moon. We rise or fall together as one nation and as one people, and that’s the reason I’m running for president – because I still believe in that idea. You’re not on your own, we’re in this together.

After playing that clip, The Five‘s cast jumped into a debate over the impact of Obama’s remarks on the campaign. But the debate that followed and the insight that the hosts provided in parsing this statement by the President is muted by their presenting their audience with misleading subject matter from the start.

Obama’s “you didn’t build that” remark is perhaps the best ammunition the President has handed his critics in some time. Republicans and the Romney campaign will use it against Obama — it would be malpractice for them to ignore it. Democrats have been defending Obama saying that his speech was taken out of context – even within the full context, it has the potential to be politically damaging to the President. But by grossly over editing the speech in this segment, The Five has advanced the narrative that Obama is being taken out of context.

Regardless of the political fallout that results from Obama’s controversial remarks, it is not the place of The Five — or other opinion programs — to do the Romney campaigns bidding for them.