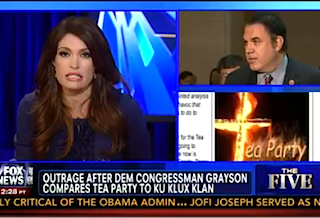 The fallout from Rep. Alan Grayson’s most recent fundraising email continued today on The Five, where the hosts tore into the Florida Democrat one by one for using imagery associated with the Ku Klux Klan to attack the Tea Party. “The black community doesn’t need to be reminded of the horrors perpetrated by the KKK,” Kimberly Guilfoyle said at the top of the segment, “yet their so-called leaders remain silent.”

Bob Beckel said those leaders of the black community need to have a Bill Clinton-style “Sister Souljah moment” when it comes to instances like this. “Why Jesse Jackson and Sharpton don’t take advantage of one of these things and stand up? They’d get a lot of good press out of it. And who’s going to be against them?”

“Why doesn’t President Obama?” Dana Perino asked. She noted that the president decided to call out one member of the GOP for comparing Obamacare to slavery in a recent speech, “but they refuse to comment on this and tell Grayson to back off.”

Continuing the theme, Eric Bolling added, “This would be a great opportunity for someone to step up and just tell Grayson, ‘Shut up.’ Alan Grayson could–honestly, he may be mentally deranged. There is something wrong with that congressman.” He called on Jesse Jackson, Al Sharpton and others to “take this moment to reprimand him. He is out of line. He is absolutely ridiculous.”

And Greg Gutfeld took things even further, saying, “My theory is he burned that cross, that he might actually be a member of the KKK. Because usually racists are so smart and devious that they hide behind the smearing of others in order to propagate their own secret racism. Grayson has yet to respond to my question, are you in the KKK, sir?”

“For the longest time, there are people on the left that use racism to disarm their adversaries so the adversary cannot have a debate,” Gutfeld continued. “All I am doing is turning it back on them.”