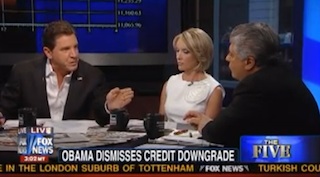 It was a four person pile-on against President Obama today on Fox News’ The Five. If you can’t guess who the hold out was, well, then you’ve probably never watched The Five. Yes, every host whose last name didn’t rhyme with “schmeckle” absolutely roasted the President over the S&P downgrade, his address this afternoon, and how this will all affect his historical standing. Sure the country may be in big trouble but, on the upside, at least four TV hosts seem to really be enjoying themselves for some reason.

While they eventually segued to bigger picture stuff, most of the discussion centered on the address. None of the right of center hosts were very impressed. Andrew Napolitano thought it needed more “meat,” Dana Perino thought he had good lines but that they were ruined by being read off a teleprompter, and Kimberly Guilfoyle said we needed a president but only got a “TOTUS.” If you don’t get that, a quick Google search will reveal that a) It means Teleprompter of the United States and, b) Tons of people use that insult as if it wasn’t ridiculously lame.

Meanwhile, Bob Beckel was taking the tact that Standard & Poor’s was a useless company so who cares. This gave him time to, as always, blame everything on the Tea Party and, as always, Eric Bolling was ready to rush to their defense. He played clips of John Kerry and David Axelrod attempting to coin the phrase “Tea Party Downgrade,” a term that is only slightly better than “TOTUS.”

This has been something I’ve noticed the past week or so with The Five. Recently, they’ve made frequent use of the Daily Show montage technique where you show quick cuts of a bunch of politicians and media figures saying the same to show how meaningless these oft-repeated talking points are. It’s an effective technique and one they’ve been using quite well. However, today, it got a little silly when Perino began talking about how “the American people see right through” repeated slogans.

Yes, a Fox News show was making fun of politicians using talking points on TV by using a technique perfected by The Daily Show to make fun of politicians using talking points on Fox News. Maybe it’s just me but that’s kind of hilarious. I’d go through the Comedy Central back catalogue to see Perino herself ever ended up on one of those montages during her days as the master of talking points, White House Press Secretary, but I’m afraid the irony would make my brain explode.

As always, there was some common ground found between Team Beckel and Team Everyone Else. They all agreed that the President and his team lost big political points by waiting so long after the downgrade to actually do some nation leading.

Maybe he was too busy working on the teleprompter, huh? Right? Because no president has ever written out their speeches beforehand, right, you guys? Totally!