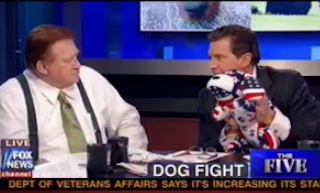 With the new revelations that President Obama ate dog meat as a child in Indonesia, have we reached an armistice in the dog wars out on the campaign trail? On The Five Thursday, the panelists sniffed over the ramifications of Obama’s new canine-culinary controversy, and thought it was time for for a new political chew toy for the candidates to play tug-of-war over.

Bob Beckel contended that Romney tortured his dog by strapping him to the roof of his car.

“It wasn’t torture!” interjected Greg Gutfeld. “It was fun!”

Beckel did acknowledge when he was over in the Philippines for the Peace Corps lots of people ate dog.

“How do you know you didn’t though?” Kimberly Guilfoyle teased.

“Well, maybe I did,” Beckel mused.

Eric Bolling mocked Beckel over Obama’s dog meat-eating by waving his stuffed animal “Patriotic Pup” in his face. “When the president is riding in the car with Bo, does he go ‘oh, he tastes like a good boy?'” Bolling ribbed, cracking up the panelists.

“This issue has been neutralized,” Dana Perino surmised and shared some of her favorite Obama dog-eating jokes.

“It was very, very smart to bring that up, not because he ate dog, you took it out of the campaign,” Bolling gushed.

“Let me give Romney’s campaign credit,” Beckel said. “Their ability to respond quickly to the Obama campaign on things like this is better than the McCain campaign ever was.”