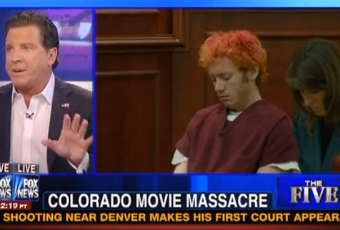 Much has been made ado about the “politicization” of Friday’s mass shooting in Aurora, Colo., with many people criticizing commentators and politicians alike for bringing up gun control issues so soon after the tragic events transpired. On Monday’s edition of Fox News’ The Five, the panel debated whether now is the right time for anyone to discuss the political implications of the massacre, with liberal host Bob Beckel saying — much to the chagrin of his more conservative co-hosts — that “we must take the heat of the moment” to address gun violence.

“Many of the people in Colorado are grieving,” co-host Dana Perino began. “Some people can’t help themselves and talk about the politics of a certain situation,” including New York City Mayor Michael Bloomberg who on Sunday told CBS that he would like to see both Mitt Romney and President Barack Obama talk more gun control.

Co-host Andrea Tantaros came out swinging at the mayor, saying “there were bodies not even out of the theater, but he jumped into the [gun control] debate. There’s some level of political protocol you need to have, in a tragedy, where you wait.”

“I know it’s very hard to take Bloomberg seriously after going after salt and soda,” she continued, “but I think it was in very poor taste.”

The panel’s liberal member Bob Beckel disagreed with his colleagues, saying that he doesn’t mind the political discussion so soon, because “the politics are impossible to get through.”

– RELATED: Piers Morgan Clashes With Guest Over Whether It Is Appropriate Time To Discuss Gun Control

“Every time one of these things happens, gun control people are told, ‘You shouldn’t talk about it now,'” he lamented. “But you put it off then we don’t get a chance to make you’re arguments in the heat of the moment. It may be difficult to listen to, but the reality is there’s no purpose in having SR-15 guns. There’s no sport purpose or nothing else. The [National Rifle Association] loves the fact they don’t have to deal with this and we’re told to shut up because it’s a terrible time. We have to take the heat of the moment.”

“There’s a time and a place for that discussion,” responded conservative co-host Eric Bolling, “but… there were ten bodies in bodybags in the theater and [Bloomberg] could not wait to get his number one most important issue out… There were families who haven’t been notified their loved ones are in the theater. It’s ridiculous and unfair.”

Co-host Greg Gutfeld added that perhaps these “first responders” like Piers Morgan and Mayor Bloomberg took up the issue immediately just to hear themselves talk.

“The problem is the time and place for the debate gets cold when you get farther away from these things and we cannot have that debate,” Beckel said.

“This debate never gets cold. Have it any day of the year,” Bolling shot back.