The Five Comes to a Head over Iraq: ‘We Don’t Know Who We’re Arming!’ 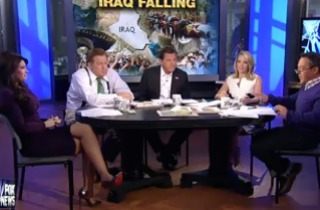 The hosts of The Five quarreled over Iraq today, with Eric Bolling continuing to side with Bob Beckel and saying it’s just not worth it for the United States to put all these resources into nations like Iraq in the hopes of spreading democracy. Kimberly Guilfoyle was extremely critical of President Obama, asking “Didn’t he get a little CliffNotes version of how to combat terrorism?”

Beckel expressed his exasperation with the U.S. getting caught in the quagmire that is the Middle East and said, “There’s very little we can do except let these countries go.” Guilfoyle called it “naive” to think the U.S. could “turn a blind eye to the Middle East” and become a nation of “quitters.”

Bolling, however, continued to insist that the U.S. should stay out of the region because trying to help out forces in Iraq or moderate rebels in Syria ended up backfiring in a big way.

Guilfoyle shot back asking if the U.S. should just “hide in the closet with our favorite blanket and a flashlight.” Bolling said the nation’s philosophy should continue to be “you see a terrorist, kll ’em,” but maintained there is no good reason that the United States should continue spending money in the region.