The Five Crew Rejects Connection Between Boston And Guns: ‘What Are You Going To Do, Ban Pressure Cookers?’
VIDEO

The Five Crew Rejects Connection Between Boston And Guns: ‘What Are You Going To Do, Ban Pressure Cookers?’ 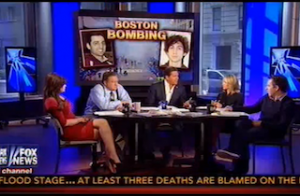 According to The Five‘s Eric Bolling, now that one week has passed, “it is time we start to explore the political fallout from the Boston bombings.” Monday afternoon on Fox News, Bolling and his co-hosts debated the attempts by some lawmakers and media figures to inject the events in Boston into the ongoing gun debate.

Bolling pointed to this Sunday’s edition of NBC’s Meet The Press, during which Tom Brokaw, in addition to pointing out the suspects’ Muslim faith as a factor, also discussed their access to guns with host David Gregory in a move that Bolling said made the show look “small, cheap and desperate.”

Kimberly Guilfoyle pointed out that the suspects guns were obtained illegally, claiming “where there is a will, there is a way. You can’t blame it on the weapons.”

Both women’s arguments came down to the point that criminals set on killing are going to get their hands on guns if they really want them, and either way they will be able to make bombs out of common household appliances, so making laws that ban the weapons themselves is a lost cause. For his part, liberal co-host Bob Beckel came off as completely defeatist, saying, “the gun debate’s is over. Your side won. It’s simple as that.”