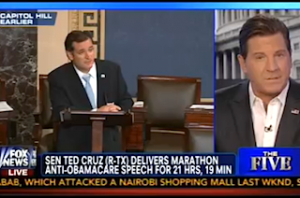 The hosts of The Five opened their show Wednesday afternoon by offering reactions to Sen. Ted Cruz’s marathon quasi-filibuster against Obamacare that ended earlier today after a grueling 21 hours. Eric Bolling said what was “so great” about Cruz’s display was that it “forced the liberal media” from MSNBC and CNN to CBS, ABC and NBC to cover the senator’s objections to the Affordable Care Act.

Greg Gutfeld picked up on the possible media bias that POLITICO’s Dylan Byers pointed out earlier today. “Cruz’s talk-a-thon is seen as a silly stunt among many, but Texas State Senator Wendy Davis became a national media darling for filibustering against a ban on abortions after five months.”

On the media question, Dana Perino said the treatment of Cruz made her even more “empathetic” towards him. “They are so disdainful of him,” she said, “but I admired it. I couldn’t believe when I woke up this morning that he was still going.”

Bob Beckel said that just as then-Senator Barack Obama stood up on the Senate floor in opposition to Iraq to differentiate himself from Hillary Clinton, Cruz’s move was all about presidential positioning and “appealing to the base.” He added, “I think it may be smarter politics than it looks like.”

And Andrea Tantaros hailed Cruz as a “genius” because “he drove the news cycle. Whether the media liked it or not, he forced Republicans to go on offense. He forced the media to talk about it. He got people’s attention.”

But, the question remains, what did Cruz get the media to pay attention to and why did he do it? Bolling asked how a man standing up for what he believes in and talking with passion could be a “waste of time,” as Senate Majority Leader Harry Reid said shortly after it was over. Beckel said “this was not about necessarily passion about Obamacare, as much about passion for Ted Cruz.”

But Bolling wasn’t buying it, saying that even if Obamacare remains intact, as almost everyone thinks it will, Cruz will still have helped the Republican Party. “It was a brilliant move by Ted Cruz,” Bolling said. “It gave him 21 hours of talking about how bad Obamacare is. And in the end, they’re going to push it through anyway, and the Democrats are going to have to own the darn thing.”