The Five Diagnoses ‘Problem’ with CNN and MSNBC’s Shooting Coverage 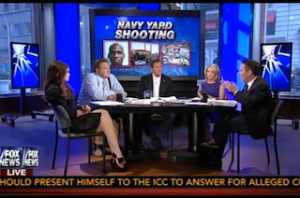 Is the media “sensationalizing” the Washington Navy Yard shooting story? That was question that kicked off Wednesday afternoon’s edition of The Five, with Greg Gutfeld leading the charge to argue that the press should spend more time focusing on the victims of Monday’s mass shooting than on the perpetrator. “Isn’t the sad reality,” Gutfeld asked, that the “culture finds the culprit more interesting than the victim?” Beyond that, the show’s hosts singled out some of the media outlets, including rivals CNN and MSNBC, that made the biggest errors in reporting the story.

On the question of sensationalism, Dana Perino remarked that two days later, many of the major newspapers had moved on, with only one featuring gunman Aaron Alexis on the cover Wednesday. But, she said, “the truth is the good guys, the victims, they never get enough attention, ever. That’s reality.”

The group also discussed the issue of mental health care in light of comments Fox’s Charles Krauthammer about how America’s dedication to civil liberties are keeping people like Alexis out of institutions. Perino warned against a slippery slope when it comes to putting people in mental hospitals against their will. “What if they just say, ‘You’re a right-wing nut and we’re putting you in an institution?'” she asked.

Towards the end of the segment, Gutfeld steered the conversation back to the media’s handling of the story. “A lot of red faces over getting a lot of stuff wrong,” he said, pointing first to the New York Daily News cover that falsely claimed Alexis had used an AR-15 assault rifle in his shooting spree.

But it was Eric Bolling who shined the light on the cable news competitors. “Chuck Todd tweeted the wrong name of the shooter,” he said, in reference to Todd’s retweet of the false NBC News report. “Piers Morgan spent a whole lot of time on air saying ‘There’s that darn AR-15.'” Bolling argued instead that the AR-15 “probably saved lives” when officers arrived on the scene and used the gun to take down Alexis.

“Their haste to be first precedes their interest in being right,” Bolling said, “and that’s a problem.”

“Yeah, you’d rather be second or third and right than first and wrong,” Gutfeld agreed.

Of course, as America learned from Jon Stewart last night, CNN may have been the worst media offender on Monday, but Fox News was not immune.