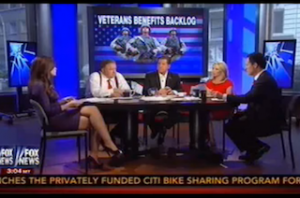 Typically, when the hosts of Fox News’ The Five play a clip of Jon Stewart, it’s used to demonstrate everything that’s wrong with the liberal, mainstream media. But for Memorial Day, the show decided to open with a segment from The Daily Show they could all get behind.

The clip in question came from the most recent installment of Stewart’s consistent attacks against the Department of Veteran Affairs’ benefits claims backlog.

Eric Bolling, who has had his disagreements with Stewart in the past, gave him credit for “very outspoken on this issue.” He reserved his criticism for President Obama, who “literally said we have to fix this” but “then he doesn’t do anything.”

The bipartisan nature of the issue extended to Bob Beckel, who was even more furious than Bolling over the VA’s apparent inability to process its benefit requests. Calling the situation “disgraceful” and “unacceptable,” he advocated for department head Eric Shinseki‘s resignation.

Dana Perino saw a possible solution to the problem in Obama’s connection to the technology sector, suggesting the government recruit people from Google or Facebook to help solve the backlog. “I would bet you, they might be surprised that there is some private sector talent that could come in and help.” And if it’s more workers the VA needs, Perino suggested, why not hire veterans?

If Jon Stewart and Fox News agree that something needs to be done about this, then it’s just the kind of bipartisan issue that President Obama and Congress should be able to solve.