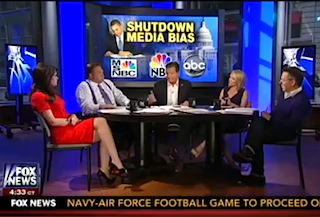 After opening their show with coverage of the Capitol Hill shooting incident Thursday, the hosts of The Five moved on to the other big story of the week: the ongoing government shutdown. This time, they focused in on statements made over the last 24 hours by anchors on Fox’s rival news network MSNBC. From Ed Schultz claiming Fox is responsible for the Obamacare “glitches” narrative to Martin Bashir predicting Republicans would label President Obama an “angry black man,” The Five was not too impressed with its competition.

After playing the clip of Schultz blaming Fox News for spreading the message about “glitches” in the Obamacare exchange signup process, Eric Bolling pointed to President Obama’s use of that very word during his Rose Garden address on Tuesday. “Fox News didn’t make it up,” Bolling said. “Your man himself, President Barack Obama , claimed there were glitches.” He said it was all part of the “liberal and mainstream media carrying water for President Obama.”

“I love Ed Schultz,” Greg Gutfeld declared. “He’s a human glitch.” Kimberly Guilfoyle agreed, saying it’s “ridiculous” that Schultz “didn’t listen to the one he worships” or even watch his own network, though she didn’t “blame him for not watching” suggesting he watch Fox to get the “real news.”

Bob Beckel defended the Affordable Care Act without defending Schultz. “Look, this is a huge national roll out,” he said, “Of course there’s going to be some glitches. There were glitches when they brought out Social Security and medicare. What’s the big deal?”

Next, Bolling presented a clip of “backup clown Martin Bashir preemptively blaming Republicans for playing the race card before they even play a race card.”

Gutfeld went off on Bashir following the clip, saying, “Martin Bashir gives racists a bad name. He is a racist. He’s what you call a secret racist in that he can’t help but project his own racism on other people. And it’s embarrassing for him. He’s not aware of how racist he really is. And he reall needs a racist intervention, somebody to tell him, hey Martin, you’re a bigot.”

On this one, Beckel could agree, saying that “bringing the black thing into this is ridiculous.”

Turning her sights on MSNBC as a whole, Guilfoyle added, “I just think it’s sad, it’s silly and it demeans them, to be honest with you. I would be embarrassed to sit there and say the type things that they’re saying. How bad are they desperate to get ratings and be provocative?”