The Five Hits HuffPost, MSNBC for Going ‘Soft’ on Obamacare 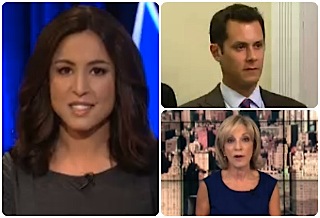 Wednesday afternoon on The Five, Andrea Tantaros cited a poll that puts President Obama’s job approval numbers at 37% “despite the fact that many in the media are in his back pocket.” As evidence, she pointed to a “softball” question the president got from The Huffington Post’s Sam Stein during his press conference yesterday.

“Not exactly adversarial, huh?” Tantaros said, after the playing the clip, in which Obama thanks Stein for making an “important point.” She also showed a clip of Fox’s Brit Hume condemning Obama for “deliberately” avoiding mainstream TV reporters in favor of wire and online outlets.

Former George W. Bush press secretary Dana Perino said she doesn’t remember ever getting a question as easy as the one Stein asked and thought that perhaps some members of press were intimidated by Obama out of asking tougher questions. “It is an interesting move to decide to use a television medium to go into the White House press briefing room and then not call on anybody from any of the TV networks,” she said.

Later, the group looked another media moment from yesterday, this time GOP Rep. Sean Duffy’s tense exchange with MSNBC’s Andrea Mitchell over the lack of tough questions from that network and others about problems with the Affordable Care Act.

“What would the media do without this shutdown?” Tantaros asked. “Imagine if it were just the implementation of Obamacare. Would they be able to get away with not covering it at all?”

Greg Gutfeld said the media is using the shutdown as an “excuse” to ignore the Obamacare implementation. He then made an analogy about Obamacare and Megan Fox that you will have to see to believe.

Finally, Bob Beckel challenged the notion that the media has been at all forgiving when it comes to the Obamacare rollout issues. “The Huffington Post question was clearly a puff question, no question about that, but I haven’t seen the media be so kind to Obama,” Beckel said.