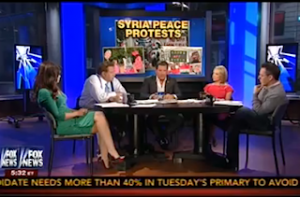 Monday afternoon, The Five asked a question that many anti-intervention conservatives have been posing over the last few weeks: “Where are the Hollywood peaceniks?” As a jumping off point, Greg Gutfeld pointed to a suggestion made by liberal actor Ed Asner that many in Hollywood fear that opposing President Obama’s Syria strike will make them appear “anti-black.”

“You’re telling me that celebrities are abandoning a principled stand in order to preserve their social standing among their own cowardly circles?” Gutfeld asked, before wondering if it really could be fear of being called a racist that has actors like Susan Sarandon and Sean Penn staying silent on this issue.

Kimberly Guilfoyle, who revealed that Asner was her former “uncle” by marriage commended the actor for speaking out on” what he believes is the real reason behind it.”

“He provided cover for the rest of the liberal Hollywood principled anti-war people,” Eric Bolling suggested, who now have an excuse for their lack of action. Predicting that “a bunch of Syrians” will die if the U.S. takes military action, Bolling wondered if Hollywood’s loyalty to Obama was more important than that.

On the other side of things, the progressive organization MoveOn.org has come out strongly against intervention, sticking to their anti-war guns even if it means going against the president. Dana Perino predicted that Democrats in Congress will find themselves torn between pleasing MoveOn on one side and pro-Israel lobbying group AIPAC on the other, which is pushing for action.

As for Bob Beckel, he thought MoveOn should be “ashamed of themselves” for going against the Syria strike after so many children have died at the hands of the Assad regime.