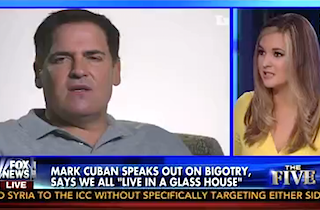 Dallas Mavericks owner Mark Cuban’s most recent reaction to the Donald Sterling controversy created a sharp divide on Fox News’ The Five Wednesday, between those who commiserated with his assertion that “we all have our prejudices and bigotries” and those who outright rejected that notion. But perhaps the strangest response came from occasional co-host Katie Pavlich, who argued against Cuban’s main point before agreeing with them that she too crosses the street if she sees a “black kid in a hoodie.”

“I thoroughly reject this idea that we all have our prejudices and that we’re all bigoted in some way. I completely reject that,” Pavlich said, before weighing on Cuban’s specific examples. “If I see a black kid in a hoodie walking down the street late at night and I’m walking down the street, I cross the street because I feel unsafe,” she said. “Same thing with the tattoos on the guy on the face with the bald head. I’m protecting myself in the name of safety to get away from that person. It’s not about being a bigot or being prejudiced. It’s about simply putting my safety first.”

But then, when Andrea Tantaros pointed out to Pavlich that she would be “prejudging” the person on the street in that scenario, she appeared to agree.

Earlier in the segment, Bob Beckel commended Cuban for what appeared to be a “pretty honest” statement that people do not make very often. Tantaros agreed that Cuban was being “extremely honest” with what he said but did not think he should have used the word “bigoted.”

“I think he should have used the word ‘prejudiced’ and I think people get the two confused,” Tantaros said. “We all prejudge. If i’m walking down the street and see somebody who hasn’t showered in a week and has tattered clothes, I prejudge them as being poor. If someone walks down the street dripping in diamonds with a fur coat and a Rolls-Royce, I prejudge them as being rich. And so I think all of us are guilty of prejudging everybody. And if we say that we’re not, then we’re lying.”

On the other hand, Eric Bolling said while Cuban’s ideas may have been true 30 or 40 years ago, “we’ve come a really, really long way” since then. He said “unequivocally” that a black kid in a hoodie would not make him cross the street.

Before the segment ended, Beckel revealed that while he’s not particularly scared of black guys in hoodies, a decades-old experience involving an elderly woman jumping on his back has left him perpetually scared of “old ladies.” As for Bolling, he added, “If I saw six clowns, I would cross the street. Does that make me prejudiced?”

During The Five’s discussion, Cuban tweeted an apology to Trayvon Martin’s family for using the “black kid in a hoodie” as his example in the earlier interview.

[Update: This post’s headline was changed to provide more context to Pavlich’s remarks beyond just the mention of black men in hoodies.]