The Five Hosts Battle Over ‘Media Bias’ in Shutdown Coverage: ‘Are You Kidding Me?’
VIDEO

The Five Hosts Battle Over ‘Media Bias’ in Shutdown Coverage: ‘Are You Kidding Me?’ 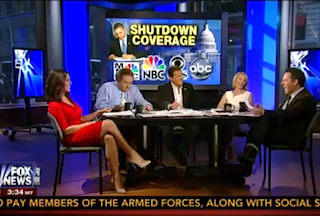 On day one of the government shutdown, Fox News’ The Five examined any media bias that may exist in the initial coverage, with a focus on anti-Republican, pro-Obamacare messages coming from such outlets as ABC and CBS News.

Eric Bolling cited ABC’s John Parkinson’s blog post about the “all white male” House Republican caucus and Face The Nation host Bob Schieffer’s claim that most Americans favor Obamacare as examples where the press is unfairly siding with the Democrats.

Greg Gutfeld responded by saying he did some “calculations” and “figured out the only way to balance the favorable Obamacare coverage of the last five years is for me to repeat that Obamacare sucks until 3142 AD.”

And Dana Perino summed up the mainstream media’s take on Obamacare by saying that “most of these people are employees so they have health insurance, and they think that Obamacare was a good idea and that Republicans are being ridiculous.”

For his part, Bob Beckel fought back against the notion that the media is “in the tank” for Obamacare, saying many outlets have been highly critical of the law, especially in recent weeks leading up to the October 1st launch date. Andrea Tantaros singled out that MSNBC host who had trouble signing up for the exchange on air as an unexpected instance of “fairness” from that network, but said she does see bias elsewhere.

“I think they can cover up the headlines as much as they want to or choose not to report them or fudge whatever polls they want,” Tantaros said. “But, again, I think the American public is so savvy when it comes to health care even if they never cover Obamacare again, I think people can see their premiums going up.”

“Are you kidding me?” Beckel shot back in seeming disbelief that Americans have any idea what is happening when it comes to health care in this country.

And, for the record, there was no mention of the FoxNews.com website, where the term “government slimdown” has replaced “government shutdown” across the homepage.