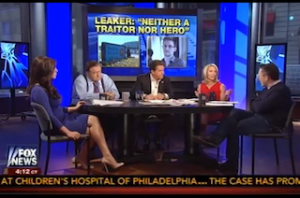 Wednesday afternoon Fox News’ The Five continued its coverage of the NSA leaks by looking at statements made by the agency’s head before Congress today. NSA Director Gen. Keith Alexander told a Senate hearing that “dozens of terrorist events” have been prevented by the surveillance programs that have so many Americans up in arms this week. So assuming that the NSA programs have made Americans safer, were free to discuss whether the implications on privacy makes the measures worth it.

“President Obama has demonized 95% of everything I believe in,” Greg Gutfeld said, but on this issue he’s willing to accept that the government creating a database of phone calls does not infringe on his Fourth Amendment rights.

But Eric Bolling took a very different view, saying, “to do this without any probable cause or without any suspicion of specifics is dangerous.” The NSA may say they’re only collecting data, but, he asked, “how do you know they’re not going to wire tap you?”

Dana Perino shot back at Bolling’s hypothetical scenario, saying that as much as she knows about these issues from working in the Bush administration, “I don’t feel like I have enough information now to be able to make such pronouncements, to be so passionate, and to call people liars and RINO’s… just because we’re saying we should give [the Obama administration] a chance” to explain the programs.

As the hosts continued to butt heads, Gutfeld drew an analogy with the gun debate. While one person might say “we need to get rid of all the guns” another will counter with “it would be better if everyone was armed.” And the discussion hits a wall. Similarly with the NSA issue, one side is saying “this is a violation of the Fourth Amendment” while the other side is saying, “no, it’s data collection and it’s there to prevent terror.”

Taking another page from the gun debate, Bolling compared the NSA’s data collection to a hypothetical national gun registry. “I’m against that because I don’t know what they want to do with it,” he said. “I’m guessing the same people who say Snowden is a bad guy are the same people who say let’s go for national registry because it may prevent something bad from happening.”

Overall, the segment was another example of how NSA surveillance story has continued to realign the political alliances of The Five‘s hosts, just as it has creating new divides within the Republican Party.