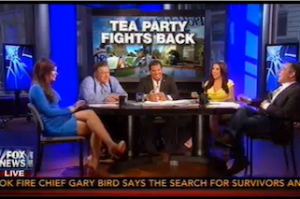 Tuesday afternoon on Fox, the hosts of The Five took a break from covering the Oklahoma tornado aftermath to turn their attention to tea party rallies across the country today and mainstream media’s refusal to take them seriously. Even after, as Greg Gutfeld said, tea party groups “actually earned victim status for real,” the press is cautioning against giving them too much credibility.

“For the media, this has to be awkward,” Gutfeld said of the anti-IRS rallies, adding, “maybe painting [the tea party] as racist” helped encourage the IRS to target them for audits. Now, the AP is reporting that “the tea party runs the risk of going too far in its criticism, which could once again open the door to Democratic efforts to paint it as an extreme arm of the GOP.”

Comparing the tea party to “your parents,” Gutfeld said, “You hate them for their opinions until you realize they were right all along. Wouldn’t it be great if the American media could grow up and do the same?”

“Remember what birthed the tea party?” Eric Bolling asked. “Obamacare.” Making a connection recently promoted by Rep. Michele Bachmann (R-MN) and others he said, “Look what we have now. We have the IRS about to take over administering Obamacare–a perfect circle–and the tea party was right from the very beginning to push back from this. This is bad.”

Andrea Tantaros said she sees opportunity for the tea party after the IRS scandal. “It should be bigger and stronger now,” she said, “because they have more sympathy from the other side of the aisle. Now they’re not the big bad bullies. Maybe now they should make a case to abolish the IRS, get rid of it all together.”

Curiously invoking Mitt Romney‘s “47 percent” line, Kimberly Guilfoyle argued that all Americans should take the tea party seriously becayse they care about “being able to make sure that an agency that is so powerful and crushing like the IRS is above corruption. Because what they’ve done here by targeting Americans is not only unconscionable, it’s illegal.”