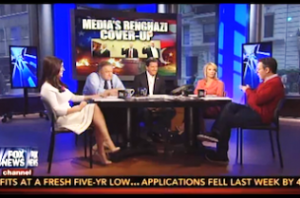 One day after accusing the media of acting as President Obama‘s “scandal condom” on the Benghazi story, The Five‘s Greg Gutfeld was at it again, this time calling MSNBC’s Rachel Maddow and Comedy Central’s Jon Stewart and Stephen Colbert “media hacks” for their highly critical commentary on Fox News’ coverage.

“People died, but what difference does it make?” Gutfeld said sarcastically, echoing Hillary Clinton‘s infamous Benghazi hearing question. “The story will probably die, like the four in Benghazi with the lapdog media standing down, making these so-called journalists co-conspirators in the Benghazi cover-up, and that’s comedy when you’re winning.” He summed up the position of Maddow, Stewart and Colbert like this: “They refuse to actually cover the story. Instead, they want to cover people who care about the story, because then that kind of absolves them from having to deal with the ugliness.”

Andrea Tantaros agreed, pointing out that they were happy to cover the Benghazi story when the focus was on Mitt Romney‘s “shoot first, aim later” reaction. “Now we know Mitt Romney was vindicated with those hearings yesterday,” she said.

‘Without us, they wouldn’t be millionaires,” Dana Perino said of Stewart and Colbert, noting the amount of material Fox News provides the Comedy Central hosts. “Now they’re to the point where they have to all cover up their cover-up so they don’t look bad,” she said of the recent coverage, “and maybe they do start to believe it inside.”

Meanwhile, Eric Bolling decided to throw a new name into the mix, calling out “that schmuck” Joe Scarborough, who he said “shamelessly” decided to “jump on the bandwagon” on the Benghazi issue today, eight months after the attack. Bolling also unveiled his convenient new diagram, revealing the new fourth branch of govenment: 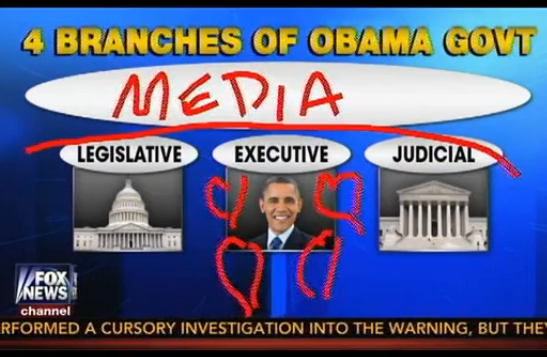 Bob Beckel got under Perino’s skin for comparing the nine hearings on Benghazi under Obama to the one hearing under President George W. Bush after 54 diplomatic missions were attacked and nine Americans died. “Are you kidding me?” Perino shot back at Beckel, saying the difference in this case is the “cover-up” that is yet to be proven. “What kind of comparison is that?!” Unlike Bush, Perino said, the Obama administration is trying to “sweep” this scandal “under the rug” and “pretends like their you know what doesn’t stink. That really pisses me off.”