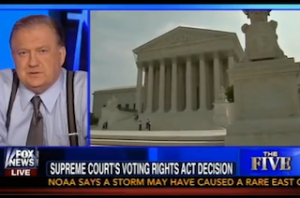 The Five’s Bob Beckel introduced a segment on the Supreme Court’s Voting Rights Act ruling today by explaining that his father was “very much involved” in helping to pass the original bill. He warned that if Congress doesn’t act to protect voter rights, the Supreme Court will have “gutted the whole Civil Rights bill.” His more conservative co-hosts did not necessarily agree.

Dana Perino objected to the notion that the Supreme Court is actively trying to “deny anyone voting rights,” but instead the ruling is there way of telling Congress “you need to do a better job.” If President Obama is as “deeply disappointed” by the decision as he said he was today, Perino argued, his administration should “put their shoulder behind it and try to get it done.”

“I don’t think anyone is arguing that in 1965 it was unnecessary,” Andrea Tantaros added, agreeing with Beckel, because “it was a remedy to a really serious wrong.” But today, she said, “these states should be able to act on their own” without having to be overseen by the federal government.

While Greg Gutfeld said he really didn’t know what the decision would mean for the country, he took solace in the fact the Attorney General Eric Holder was unhappy about it. “Anything that Holder calls a setback has to be good,” he said. “Because this is a guy who really didn’t think the new Black Panthers in Philadelphia at the voting polls was a serious set back. Suing specific states over certain things, that wasn’t a serious set back. So when Holder is disappointed, I walk a little happier.”

Beckel got the last word on the issue, saying, “Congress is going to have to act on this. If they don’t act on it, you will find there will be disenfranchised voters in certain southern counties and it’s just wrong.” He ended by saying, “Pop, you’re rolling over in your grave, I know you are.”