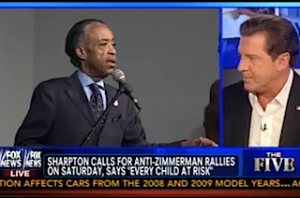 Fox News’ The Five spent most of its Monday afternoon hour reacting to the George Zimmerman verdict and dedicated one full segment to the comments made by MSNBC host Al Sharpton since the jury acquitted Zimmerman Saturday night. Sharpton was one of the first to call the verdict an “atrocity” after it was handed down, but Eric Bolling focused on a Today Show appearance Sharpton made this morning during which he promoted civil rights protests across the country this coming weekend.

“In the aftermath of every racially-charged trial some so-called civil rights leaders play the race card,” Bolling said. “They need there to be racial division to remain relevant,” he added before playing the clip of “race-baiter” Al Sharpton. Bolling contrasted Sharpton’s comments with those made by former Republican congressman Allen West, who he commended for “leading” rather than “picking at America’s sensitive and not-fully-healed racial scab.”

Bob Beckel, who expressed his own outrage over the verdict earlier in the show, also condemned Sharpton for neglecting to urge the protesters to remain non-violent. “Do I think that Al Sharpton stokes the fires because it keeps him relevant?” Beckel asked. “In some ways, yes.” But, he also asked, “Do I believe now that there is no racism in this country? Absolutely not.”

Beckel agreed with a theory put forward by Greg Gutfeld that posited Sharpton has only made racial tensions worse, not better, through the activism in which he engages. And when Dana Perino brought up statistics about black-on-black gang violence, Beckel offered, “why is it that Al Sharpton doesn’t go to Chicago and say it is time for you all to stop killing each other is beyond me.”

Lumping Sharpton’s recent comments with those made by President Obama‘s statement about Trayvon Martin from early last year, Kimberly Guilfoyle condemned anyone who injects race into a case like this one. “I’m not saying racism doesn’t exist,” she said. “It does. I have a problem with people that want to make it more pervasive and create more problems and not even try to move forward in the right direction. This is dialing it back. This is putting us back further than we need to be as a country. And I think it is irresponsible and they use it for their personal gain and personal promotion.”

Taking a step back before the segment ended, Beckel pointed out that the black community would likely be upset about the outcome of the Zimmerman trial “with or without Sharpton.” He added, “They are angry out there.”