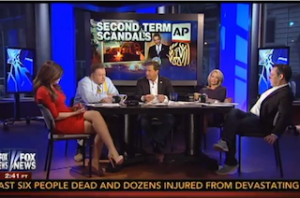 Thursday afternoon on The Five, Bob Beckel turned on some of his fellow liberals, who he says have “stepped over the line” in their defense of President Obama against his latest onslaught of scandals. Pointing to a recent discussion between MSNBC’s Chris Matthews and Al Sharpton on the role the race has played in conservative opposition to the president, Beckel said “this IRS scandal is a serious political problem–it is not a race problem.”

Eric Bolling took Beckel’s sentiment a bit further, saying, “Chris Matthews was racist more than anything I’ve heard anywhere.” Predicting that he will be just as critical of Hillary Clinton is she becomes president, he asked, “am I going to be a misogynist?”

Dana Perino used the opportunity to go off on Matthews’ voice. “I can’t stand it,” she said. “I drives me insane.” Taking a shot at MSNBC’s less-than-desirable ratings, she added, “No wonder people turn to other places to find out their news because you’re not going to get it from there.”

“The assumption of racism allowed the Tea Party to be persecuted by the IRS,” Greg Gutfeld added. “When you are now obsessed by this persecution, then you are called racist even more. That’s how these race-mongers exist. Without accusing people of race you are out of a job. Al Sharpton is out of a job. Chris Matthews is out of a job. He was dropped on his head as an adult.”

Finally, Kimberly Guilfoyle added her two cents, saying of MSNBC, “They’re losing credibility in leaps and bounds. They’re very defensive. They don’t want to talk about the truth, so they name call and engage in this kind of bigotry. It cheapens the dialogue. They should care about Americans being persecuted for their ideological beliefs.”