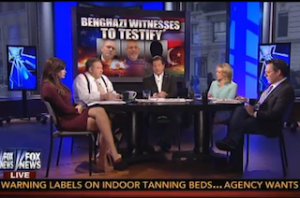 The hosts of Fox News’ The Five were fired up Monday afternoon after news broke that whistleblowers will be testifying this week in the investigation into the Obama administration’s handling of last year’s Benghazi attack. After catching their viewers up on the new developments, the hosts tore into both the administration and the media for what they see as a deliberate “cover-up.”

Eric Bolling said “this is one thing and one thing only: a blatant cover-up.” He accused the Obama administration of playing down the event when it occurred so the president could say “I was tough on terror and Al Qaeda was on its heels” during the final two months of the 2012 campaign.

Saying she’s “surprised” the administration could “contain this story for as long as they have been able to,” Kimberly Guilfoyle said now she’s looking ahead to 2016 and the “impact this is going to have on Hillary Clinton.” She added, “I’m sure there are quite a few Republicans that want to make sure the truth gets out because right now she’s the one to beat.”

Greg Gutfeld weighed in next saying, “I get the White House cover-up. What I don’t get is the media cover up. That to me is the real scandal.” He proceeded to compare the mainstream media’s coverage of the Benghazi attack to the college friends of Dzhokhar Tsarnaev, who helped him dispose of evidence from the Boston bombing. “They just took a story and they threw it aside.” Extending the Boston-Benghazi metaphor, Gutfeld said that blaming the “Innocence of Muslims” video for the Benghazi attack would be like blaming the Lord & Taylor surveillance tapes for the Boston bombing. “These reflexes are based on one initial assumption and that is American guilt–that we are always at fault.”

Naturally, the only host unwilling to throw the Obama administration under the bus was Bob Beckel, who took major heat from his co-hosts by saying, “the idea of a cover-up here is so far out–it’s inconceivable to me that a cover-up and ordering people to change their talking points and not expecting to get out…” Much to the delight of the rest of the panel, after they described the scenario expected to be laid out by the whistleblowers in which Obama administration officials told rescue teams to “stand down,” Beckel said, “somebody should be arrested for accessory to murder then if that is the case.”