The Five Hosts Put Media ‘On Trial’ For Injecting Race Into Zimmerman Case: ‘Should Pay For Crap They Put Out’ 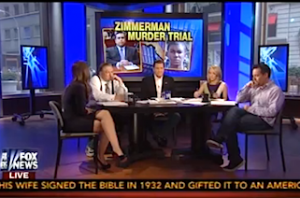 Fox News’ The Five opened their Friday afternoon show with a look at the first week of the George Zimmerman murder trial and the role the media has played in making it about something larger than just a deadly confrontation between two individuals.

Eric Bolling described the trial as being “awesome to watch” so far, finding himself going back and forth on which side he supports as the testimony unfolds. Discussing the “graphic” photos shown of Zimmerman’s injuries, Bolling asked, “how did he get a bloody skull in the back and a bloody nose in the front if there was no Trayvon Martin aggressiveness?”

Posing a hypothetical scenario in which the outcome of the incident was reversed, Kimberly Guilfoyle said, “If George Zimmerman had died that day,” due to injuries sustained by Trayvon Martin, “would you be prosecuting Trayvon Martin or would you say Trayvon had a right to defend himself, if he got up and took the stand, said ‘I was afraid, saw this guy following me, we ran into each other again, I was fighting him, trying to be able to get away, et cetera.” Then, she said, people would likely say, “it sounds to me like justifiable self-defense.”

Greg Gutfeld suggested that it’s not just Zimmerman on trial in this case, but “the media right now is on trial for those first three to four months after this crime occurred, of all of the race-based content they ran with, without facts, but emotion, because it created ratings.” He specifically singled out CNN for “fomenting a race trial” every hour. “The media should pay for a lot of the crap they put out there,” he said.

Bolling lauded the Martin family’s lawyer Daryl Parks for publicly stating that his clients do not want the case to be about race. “Once you remove race and look objectively at the facts and what they’re bringing to the courtroom,” he said, it becomes a lot harder to prove “beyond any reasonable doubt” that Zimmerman wasn’t acting in self-defense.

On the media’s role in perpetuating the race narrative, Dana Perino offered up some level of defense for the initial coverage of the case. “I think there was justifiable criticism of the government in Florida and the prosecution and waiting so long to charge,” she said. “So then the media put additional pressure on in order to get something done, because whether in self defense or not, there is, unfortunately, a teenager who died, so I think that’s why initially the pressure came from that point of view.”