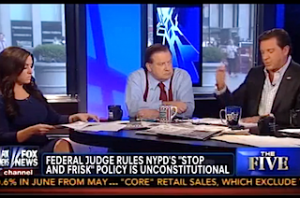 Tuesday afternoon on The Five, the hosts took on yesterday’s controversial ruling by a federal judge, who said aspects of the “stop-and-frisk” program used by the NYPD were unconstitutional. The hosts struggled a bit with whether the practice violates the Fourth Amendment, but for the most part came out against the ruling.

Eric Bolling said he was “wrestling with this all day yesterday,” but was apparently convinced that as long as there is “probable cause” to stop the program’s targets that is is constitutional. He also referred to Judge Shira Scheindlin as an “activist judge” for the way she working references to President Obama and the George Zimmerman trial into her ruling (a sentiment shared by our own Noah Rothman, who elaborated on the ruling in a column today).

His frequent rival Bob Beckel went the other direction saying stop-and-frisk is “clearly a violation of the Fourth Amendment, it is clearly profiling and ought to stop.” He said of course the police are going to react badly to this ruling, but without an independent board overseeing them, the cops can say and do “whatever they want.”

Things got even more testy when Dana Perino brought up the NSA surveillance as an equally divisive program, when it comes to privacy and security issues. Bolling said the ruling would likely be overturned because stop-and-frisk is too “successful.”

“So if it’s successful, does that mean you’re going to override the Constitution?” Beckel asked.

Bolling disagreed with the NSA comparison, saying the difference is “probable cause.” Unlike with the NSA’s widespread data collection, he said, the police only focus on people who are “acting suspicious.”

Andrea Tantaros closed out the segment by saying, “This judge is wrong on this. It makes me want to leave New York this is so ridiculous.”