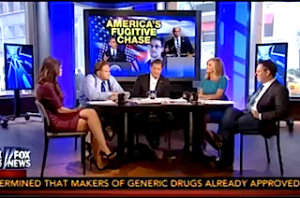 Towards the end of their show-opening segment on NSA leaker Edward Snowden, the hosts of Fox News’ The Five turned to the heated battle between NBC’s David Gregory and The Guardian‘s Glenn Greenwald during Sunday’s Meet The Press. While the NSA leak story has divided the group of late, they all could agree that Gregory went too far in suggesting Greenwald has “aided and abetted” Snowden.

“This guy is exactly right,” Bob Beckel said of Greenwald, who accused Gregory of trying to “criminalize investigative journalism.” He added, “I don’t know where Gregory’s coming off doing this… to ask that question, [he’s] just a hypocrite, as far as I’m concerned.”

Eric Bolling, who has been closely aligned with Beckel in defending Snowden, said he thought Gregory’s question was “absolutely insane.” He said he worried that more people won’t do the investigative reporting that Greenwald has been out of fear from getting attacked by the president and the mainstream media. “Bottom line,” he declared, “David Gregory is carrying water for the Obama administration by asking that question.”

Guest co-host Katie Pavlich brought up the incident when Gregory possibly, illegally held-up a 30-round magazine to make a point during an interview with the NRA’s Wayne LaPierre last December. “This is a pot meets kettle moment for David Gregory,” Pavlich said, noting that he may have broken the law for the sake of his job “yet he is trying to tell this guy he’s aiding and abetting someone charged with espionage?”

Finally, Greg Gutfeld, who has taken the unlikely position of defending the Obama administration in the case of the leaks, said that even though Greenwald works for the “most hardcore, left-wing, anti-American newspaper you will find on the planet,” he can admit that Gregory looked “incredibly foolish.”