The Five Hosts Tout IRS Scandal As Major Political Opportunity For GOP In 2014: ‘Don’t Blow It’ 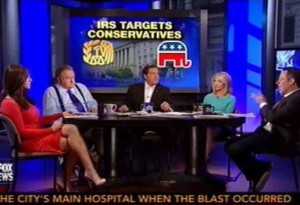 Monday afternoon on Fox News, the hosts of The Five dug into the controversy over the IRS targeting Tea Party groups during the 2012 election and came to the conclusion that it spells political disaster for Democrats in 2014. As Dana Perino said, “their hopes of winning the 2014 House back from the Republicans are over.”

Greg Gutfeld began the segment by wondering aloud of the mainstream media will ignore the IRS’ “revelation” and questioning why the administration decided to reveal the news during the fervor over Benghazi. “It’s an old ruse,” Gutfeld said. “If there is a crime scene in the living room, set fire to the house.”

“The Obama administration has declared war on anyone who disagrees with them,” Eric Bolling said, admittedly “making a leap” and implicating the Obama White House directly. “They are willing to use agencies, the thuggery of an agency like the IRS, to perpetrate this war on conservatives.”

Perino pointed out that any time an agency under President George W. Bush was implicated in a scandal, such as the EPA, the media always held Bush and his administration responsible. But in this case, she said, it appears that the media is blaming the IRS and giving Obama himself a free pass. “I do recommend one thing to the White House,” she added. “They should not underestimate the depth of anger and disgust across the board about this. And their hopes of winning the 2014 House back from the Republicans are over.”

Andrea Tantaros wholeheartedly agreed with Perino about the “political” implications of the scandal. “If this isn’t the greatest uniting factor for conservatives, Republicans, Independents, who are suspicious of Obama’s big government, about to take over immigration, this is going to do it.” He message to the GOP? “Don’t blow it.”