The Five Joins in with Catcalling Men: ‘Damn Babe, You’re a Piece of Woman!’
VIDEO

The Five Joins in with Catcalling Men: ‘Damn Babe, You’re a Piece of Woman!’ 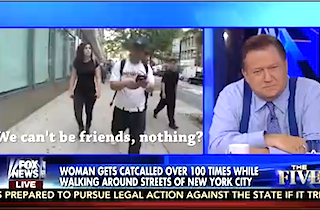 When SNL’s Michael Che sarcastically “apologized” to all the women he has catcalled on the street earlier today, he received some major backlash on social media. But the way he reacted to the video of one woman getting harassed 100 times in one day for simply walking down the street was nothing compared to what happened this afternoon on Fox News’ The Five.

Eric Bolling started things off, calling the words that this woman and others received from strangers “very complimentary” and adding, “I find it hard to find where there’s what she calls ‘verbal harassment’ going on.”

Meanwhile, Greg Gutfeld said he found it a bit “classist” for women to find fault with men coming on to them on the street when they might be open to such advances in another setting, such as a bar. “If these guys were in a bar or supermarket, she probably wouldn’t feel the same way, I don’t know.”

And while Dana Perino admitted she found some of the interactions in the video “creepy,” things really took a turn when Bob Beckel had his turn to speak.

That comment got nothing but laughs from The Five’s co-hosts, with Kimberly Guilfoyle remarking, “You can’t take an old dog new tricks.”

And watch the full YouTube video below, via Hollaback!: