The Five: Let’s Stop Demonizing The People Who Do Pay Taxes
Video

The Five: Let’s Stop Demonizing The People Who Do Pay Taxes 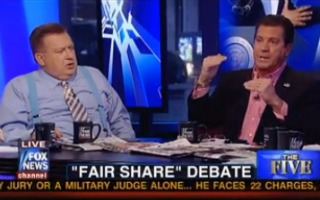 On Thursday’s edition of The Five, the crew talked President Barack Obama‘s “fair share” mantra. How does that gel with The Heritage Foundation’s finding that, in 2009, only 50.5 percent of Americans paid any income tax?

Is this news making people angry? “I’m not interested in demonizing people who don’t pay taxes,” said Greg Gutfeld, after pointing out that, when the payroll tax is taken into consideration, the number of people not paying any taxes is actually 18 percent. “I’m interested in stopping the demonization of people who pay most of the taxes. I think that’s what we’re really talking about, is the class warfare rhetoric.”

But Gutfeld is nothing if not a solution-oriented kind of dude. His advice? Set up a “fair share tax” and make members of the media cough up five dollars each and every time they utter the words “fair share.” “In a week,” he said, “the Democratic party would go bankrupt.”

Bob Beckel chimed in to note that it’s a fact (“…this is not class warfare”) that 87 percent of the income in the U.S. is earned by the top 50 percent. So why, he argued, should on the bottom “be paying any taxes” if they “don’t make any money”?

Perhaps, suggested Dana Perino, it could be that our tax system is preventing people from making more.

While they disagreed on exactly what actions could be taken to make taxes fairer and easier (including implementing a flat tax), everyone did agree that our tax system is deeply, deeply flawed and needs an overhaul.