The Five Mocks Rodeo Clown Uproar: ‘It’s Not Illegal to Make Light of the President’ 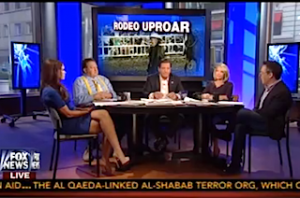 Much to the chagrin of Bob Beckel, the Missouri State Fair’s Obama rodeo clown was the top story on Wednesday afternoon’s edition of The Five. Greg Gutfeld opened the show by presenting the story as one of “sensitivity, reaction, and overreaction,” saying, “last I checked, it’s not illegal to make light of the president.”

Beckel was the only one at the table who was “offended” by the rodeo display, saying he didn’t like when someone said to the crowd that the Obama clown should be “run down” by a bull. But mostly, he just didn’t understand why The Five was dedicating so much of the show’s time to this story.

On the NAACP’s suggestion that the Justice Department and Secret Service investigate the incident, Kimberly Guilfoyle asked, “Why do you have to investigate a clown? He is wearing a mask, it’s sort of like Halloween, this is his job. Now he’s banned for life? What are these federal sentencing guidelines? It is ridiculous.”

Eric Bolling drew an analogy between the rodeo clown and other comedians who often target conservatives. “When Bill Maher says something ridiculous, rude, condescending, borderline libelous, he hides behind comedy.” He said the rodeo clown is “entertainment, not political commentary.”