The Five: Obamacare So Bad for Dems, GOP Doesn’t Need to Offer Alternative 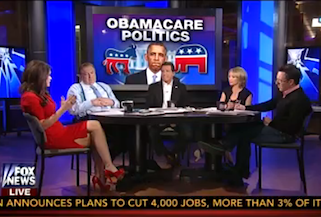 Fox News’ The Five followed their damning coverage of President Barack Obama’s morning press conference with a look at the political implications of the Affordable Care Act on the 2014 midterm elections. Namely, they asked, is it enough for Republicans to simply point out the flaws in Obamacare, or must they also offer up an alternative?

What Obama was saying to voters in his remarks today, Eric Bolling said, was “don’t blame them, blame me, the buck stops with me and all that crap. But when they go to the polling booth in a year, they’re going to blame Democrats.”

As for what Republicans need to do to work this situation in their favor, Bob Beckel said, “I think they have to get off the ‘no, no, no’ position and get onto things that need to get done.” Noting that things could still change in the year before the next election, he said, “If I were Republicans, instead of just saying ‘we told you so,’ I’d come up with something that had substance to it. So far, I haven’t seen much.”

“They don’t need to yet,” Bolling responded. “Right now, they need to point out the flaws in the website and the rollout.”

Kimberly Guilfoyle fell somewhere between these two views. “Republicans have a unique opportunity, they don’t need to overplay their hand,” she said. On the other hand, she added, “They have to come up something eventually that is alternative to avoid the pitfall of a single payer system, which is exactly what the Democrats and liberals want ultimately when this fails completely.”