The Five on How to Fix Obamacare Site: ‘Get Someone From Travelocity’ or ‘Local Starbucks’
VIDEO

The Five on How to Fix Obamacare Site: ‘Get Someone From Travelocity’ or ‘Local Starbucks’ 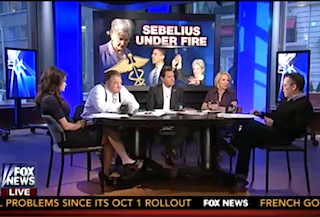 They may not want the Affordable Care Act to succeed, but regardless the hosts of Fox News’ The Five offered up their own ideas on how the Obama Administration can help fix the problems with HealthCare.gov before the deadline to enroll for health insurance. While Bob Beckel thinks Apple CEO Tim Cook should take a leave of absence to help out, Greg Gutfeld thinks that would be too extreme. “Get somebody who works at Travelocity!” he said.

The segment began with a discussion on whether Secretary of Health and Human Services Kathleen Sebelius should be fired over the Obamacare rollout. Eric Bolling called for her to be removed from her post, comparing her to someone who’s in charge of pipelines at Exxon and ends up with everything leaking at once. “She overpaid, it still didn’t work,” he said. “Fire her.”

Kimberly Guilfoyle agreed, taking her criticism of Sebelius to the next level. “I think it’s been an abysmal failure. If i were her I would run, hide in the mountains and become a recluse,” she said. “It’s embarrassing. This is America. We are the leaders in innovation and technology and we can’t get a basic health care website up and running? It’s shameful. There’s no excuse for it. And in fact, if this was the private sector, she’d be out. We wouldn’t even be having this conversation.”

This led to Beckel’s suggestion to “ask the head of Apple, whoever he is, to take a leave of absence and come in and take care of it.” When his co-hosts balked at the notion that Cook would walk away from the country’s most valuable company to fix Obamacare, Beckel suggested that some people might do it “because they’re patriots.”

“You don’t even have to do that!” Gutfeld said of the idea that Apple could take over the project. “Get somebody who works at Travelocity! Jesus, how many travel websites are there that do a far better job than this?”

Guilfoyle had an even more salient suggestion: “How about get the guy at the local Starbucks that’s ripping off everybody on the wi-fi?”