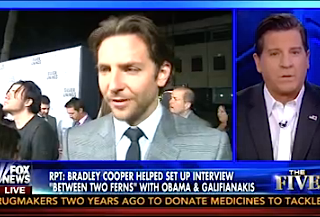 On Wednesday, the hosts of The Five did their best to unpack a new report from POLITICO that revealed it was actor Bradley Cooper’s idea to have President Barack Obama appear on web series Between Two Ferns to make a final push for young people to sign up for health insurance. “So guys from The Hangover saved Obamacare?” Eric Bolling asked.

Bob Beckel came to the defense of Cooper and Galifianakis, along with President Obama, for pulling off a successful marketing stunt. “One thing you have to give this whole thing credit for is when he did do the thing with the Galifianakis, the website did have a surge of people coming in and signing up,” he said. “So to the extent that we thought it was a bad idea — anybody thought it was a bad idea — apparently it worked pretty well.”

But the other hosts were not as kind. Andrea Tantaros compared the entire situation to an “after school special” in which “dorky” Obama was forced to turn to the popular kids for help. At one point in the POLITICO article, the president asks, “Zach Galifianakis and Bradley Cooper are going to do this for me?”

Greg Gutfeld was was even more harsh in his assessment. “They’re tools, that’s all they are,” he said of Cooper and Galifianakis. “If they supported the troops the way they supported government programs…” he added, “imagine that in Hollywood.”