The Five Pre-Games The SCOTUS Decision On Health Care
video

The Five Pre-Games The SCOTUS Decision On Health Care 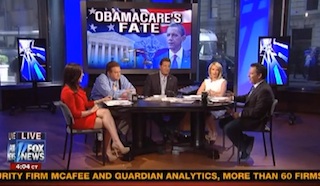 In case you haven’t noticed, today’s been a bit of a time killer day on the ol’ cable news box as everyone awaits tomorrow’s Supreme Court main event. Flipping on any of the big channels occasionally felt like watching ESPN the week before the Super Bowl or Access Hollywood in the days leading up to the Oscars. And things were no different over on The Five as they opened the show with a good Obamacare pre-game. And by that, I mean that everyone got drunk.

Oh, wait. No, they didn’t. That was just me while watching. Anyone want a burger?

Anyway, Greg Gutfeld introduced a montage of video clips designed to “show how we got here,” albeit one that leaned predictably heavy on Tea Partiers looking “noble” and Nancy Pelosi looking “confused.” The gang then launched into a discussion that Andrea Tantaros admitted was just a guessing game at this point.

Dana Perino, though, gave some advice on how President Obama should respond either way tomorrow. She thought, if it goes down, he should acknowledge his disappointment but lodge a promise to go by their ruling and, if it is upheld, he shouldn’t brag in anyway because of how unpopular she claimed the law was. This led Bob Beckel to claim the Republicans had promised not to brag if things went their way, a claim which Eric Bolling quickly denied.

I have to assume Bolling’s right. I imagine that, if the law is deemed unconstitutional, they’re will be more bragging in DC and on Fox News than in Kanye West’s house. Either way, I really hope I don’t get assigned to watch The Five tomorrow. Oh, God! And the Eric Holder contempt vote too!

Yikes! In case I do, I should probably save some of these pre-game beers!