The Five Reacts to Obama’s ‘Cheap Shot’ at Fox News 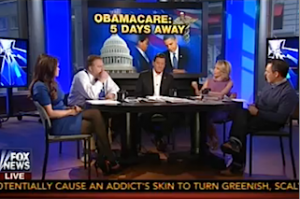 The hosts of The Five may have taken President Obama’s “cheap shot” at Fox News for spreading misinformation about the Affordable Care Act personally. But that didn’t stop them from countering the points he made in his Maryland speech earlier today harder than ever. “It’s not Fox News that doesn’t like this legislation,” Kimberly Guilfoyle responded, “It’s the majority of Americans.”

“I love the fact President Obama recommended to watch Fox News, because he does, that’s fantastic,” Eric Bolling said. “Maybe he’ll learn something.” He called October 1st, when Obamacare will begin in earnest a “sad day” that will “fundamentally change America,” but not in the positive way Obama promised on the campaign trail.

From there, the hosts began to push the objections to Obamacare that the president warned Americans to be wary of in his speech. Dana Perino discussed the cutbacks in hours by employers who don’t want to provide health insurance to their workers. And Greg Gutfeld compared the employer mandate delay to boarding a plane that’s “not safe for the crew, but it’s OK for you.” He asked, “If it’s bad for business, how is it OK for the individual?”

A resigned-looking Bob Beckel did his best to fight back, insisting that “85% of people who have insurance now will not have it changed at all.” He said that if you go to the official website, as Obama suggested, you will find that prices are “a lot lower than the scare tactics we use on this show to try to get people to believe it’s going up 400%, which it’s not.”

Of course, the moment he was finished his co-hosts jumped all over him to point out why everything he said was wrong.