The Five Reacts To Supreme Court’s DOMA And Prop 8 Rulings: ‘This Is A Huge Conservative Victory’
VIDEO

The Five Reacts To Supreme Court’s DOMA And Prop 8 Rulings: ‘This Is A Huge Conservative Victory’ 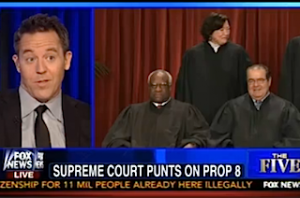 Fox News’ The Five waited until its third segment to tackle the two major marriage equality decisions handed down by the Supreme Court today. And in what can perhaps be seen as a sign of the times, none of the primarily conservative hosts had anything too terrible to say about the rulings. And Greg Gutfeld went so far as to call the decisions a “huge victory” …for conservatives.

Speaking from a legal standpoint, Kimberly Guilfoyle began the conversation by calling this “a very significant day.” She said, “this is the type of two cases that are going to be read years from now in law schools and in legal books across the country.”

Agreeing with Guilfoyle that she’s not “surprised” by the ruling, Dana Perino added, “the bottom line of it is that if you are in favor of gay marriage, you are pleased today. For those that are disappointed in the decision, there are things to look into here that there was a victory of principles over government overreach.” She said the rulings begin “the long road to having gay marriage no longer be a political weapon used by either side. And it gives people a chance to then focus on other important issues that we have in the country.”

Bob Beckel didn’t have quite as hopeful of an outlook, saying that the decision could “ignite a values war in politics.” That being said, he called the court’s decision “almost a libertarian position” in that “they’re saying the government can’t tell you how you’re going to live your lives.”

Next up, Eric Bolling did find a way to tie a criticism of President Obama and his “evolving” stance on gay marriage to the rulings. But he also found some fault in the Supreme Court for making a big decision on DOMA but giving the Prop 8 case back to the lower court.

And finally, Gutfeld made his bold assertion that the day’s news was “a huge conservative victory, because you can no longer deprive someone of an extremely traditional value that makes your life better by curtailing promiscuity and destructive lifestyles.” Opening up a bit about his personal life, Gutfeld added, “Marriage to my wife made me a better man. As a right-winger, I want to impose that belief on others because that’s what right-wingers do.”

Gutfeld urged gay activists to “move on to real challenges in this world.” Namely, “radical Islam” and it’s harsh treatment of homosexuals. “Go to a mosque,” he said, “think about your compatriots in Iran, in the Middle East who are dying because of sexual orientation.”